Gayle combs the beaches and enjoys long walks to finds objects to “photograph”. Since early 2008 she has used a wet plate collodion photogram technique on metal and glass, a process developed in the early 1850’s. The “finds” from her walks are what she places on light-sensitized material which is then exposed to light to create a darkened image. The images include a leaf, twig, frog, fish, dandelion or other objects, not all small, as some are as large as a pelican.

There is a magical quality to her “Disappearance” and the “Calligraphy” series images, which incorporate the wet plate collodion photogram technique. Whether a plate is an individual bee or an assembly of plates to create a wonderful collage of unique images, all are fascinating.

Indeed, each image is unique and range from an intimate 2”x2” object to a large 20”x20” plate. 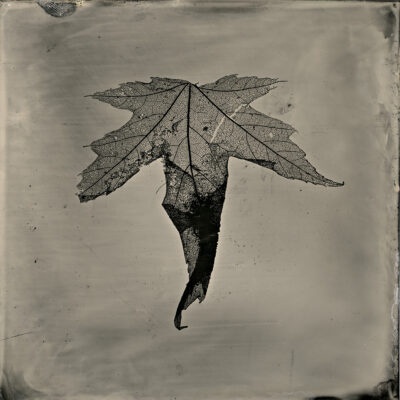 All of her objects are from nature and what I appreciate about her work is that S. Gayle is mindful of the environment. A part of the proceeds from her sales are contributed to  organizations that support a variety of environmental causes, such as her “Disappearance” Bee project that illustrates Colony Collapse Disorder. Until meeting Gayle a couple of years ago, I did not appreciate the important pollination role played by bees and other insects. 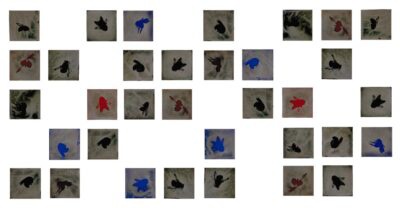 My first impression of Gayle’s work is her artistry; her photographs are objects of art. Then, I think about how she is a master of this technique. She has been working with various alternative photographic processes since the early 90s. But more important for me is the image. Seeing everyday objects she has found in nature allows me to appreciate what I otherwise might have overlooked. Her works focus my attention more completely and deeply to really see the object. Not just as an object, but as an object of art created from nature. The objects are on metal plates and are black, white and shades of gray. The process gives each image its unique enjoyable visual texture. The material provides a tactile feel different from a print on paper. Recently, Gayle has started using colored  glass through which light can pass.

S. Gayle Stevens’ work has challenged me intellectually as well as emotionally. The world has wonder, and her images cause me to stop and enjoy looking.

All images used with the permission of S. Gayle Stevens ©